Trailing 52-50 with 6.5 seconds left, Terrell had the ball and an opportunity to either tie or win the game against West Mesquite. After two Terrell time outs and one West Mesquite time out, Terrell finally inbounded the ball and tried to push it up the court. A couple of passes and pressure from the Wranglers prevented Terrell from even getting a shot off. The final score 52-50, Terrell has a three game losing streak and is in danger of not making the playoffs. 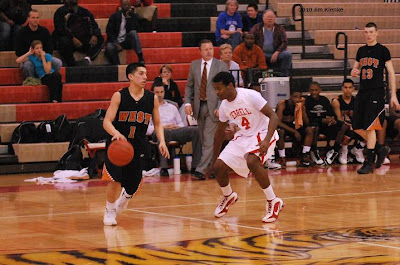 #1 for West Mesquite, Javier Soria pictured above, led all scores with 21 points.