With the start of the new year I am going to start a new feature on Mondays. Today is the first Monday Morning Mashup. My observations and thoughts on everything from the weekend sports action to whats coming up in the week ahead. 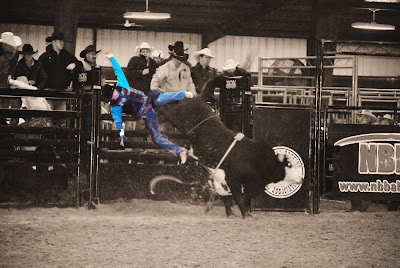 Here are a few more pictures from the bull riding Saturday night at Cowboy Collection Arena in Terrell. I tried playing around with the pictures, since most of them didn't turn out very good. The one on the bottom left was taken during cowboy introductions, the cowboy on the bottom right was brushing himself off after getting up off the ground. I don't have to explain whats happening in the top photo. 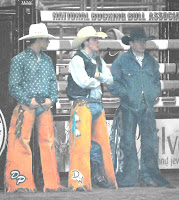 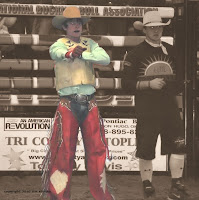 These pictures will not make any Best of 2010 list, but you can still vote on the Best of 2009 on the right hand side of the site.

The NFL regular season ended last night, if I had made predictions on who would make the playoffs, I would have picked all 12 teams...........honest.

After watching yesterdays Cowboys-Eagles game, I believe Tony Romo and Mike Jenkins deserve to be in the Pro-Bowl along with the other Cowboys already named to the team. Cowboy fans will not like it, but my hope is that Romo starts the game.

I finished the season strong, ending up 11-5 for the week and 167-89 for the year. I will make my playoff predictions later this week.

NFL Commissioner Roger Goodell said the Competition Committee will look into teams that rest starters at the end of the season. I am all for playing healthy players every game, but I would hate to have to explain why a star player got hurt and is out for the playoffs while playing in a game that didn't mean anything to the team.

I watched a few of the bowl games over the holiday break. Sad to say, but there are some announcers who need to retire.

Texas Tech was able to overcome losing their coach to win the Alamo Bowl. Some of the comments I read that were made by Tech players after the game seem to indicate that Adam James should be commended for speaking out about his treatment by ex-coach Leach. That makes me wonder, if the players are speaking out now saying "sooner or later, something was going to come out" why didn't those players speak out sooner?

The Tigers boys basketball team gets back in action at home Tuesday night against the Mabank Panthers. They are coming off a disappointing showing in the Sherman Holiday Tournament and a road lost to district foe West Mesquite Saturday.

The Lady Tigers are on the road Tuesday against Mabank. Their next home game is January 12th.

Terrell in a district that includes Marshall, Sulphur Springs, Greenville, Mount Pleasant and Texarkana? That's where they end up in this 4A realignment projection.

Pro wrestling geeks should be pumped by tonight's shows. Hulk Hogan debuts on TNA Wrestling in a live 3 hour Impact on Spike TV. Other surprises are expected on Impact. WWE Raw counters with the return of Bret Hart as guest host. I'll be watching TNA and recording WWE.

Alittlenews has made his way to SoCal and is sharing his view of the BCS National Championship game and festivities.