Tonight is family night at the Heritage Jubilee Carnival $30 will get unlimited rides all night. This is a drive-by shot from last night. 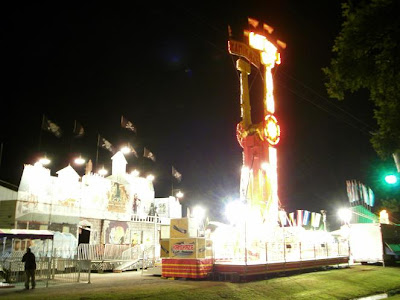 I wasn't able to make it to the Kaufman TEA party yesterday. It was held during the noon hour. I did stop by the Rockwall TEA party at the Rockwall City Hall for a few minutes. I really wanted to just see what was going on. There was a nice size crowd. I didn't take any pictures.

Shawn has started a blog. I added a link to his site on the right.

Michael over at Obstructed View is off to a great start as publisher of the Tribune. Just changing the look of the paper has created a feeling of something new and fresh. He said there are more changes to come.

Ian Kinsler is a beast. As much as I love baseball, I have lived in the Dallas area for 15 years or so, and have never been to a Texas Rangers baseball game.

Wednesdays Tribune had an insert with a schedule of events for the Terrell Heritage Jubilee. The Jubilee is held in Ben Gill Park.

This is going to be a long day, I was up till midnight watching the St. Louis Blues hockey playoff game. They lost, but put up a good fight. They are a heavy underdog.
Posted by Jim Klenke at 6:30 AM