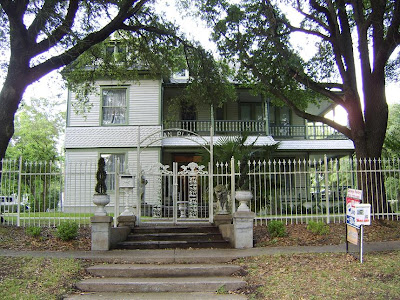 A few months ago I posted a picture of old stables. It is actually and old carriage house. The owner of the carriage and the main Victorian house left a comment about that picture.

I own this carriage house. The carriage house was built in 1897 - the same year as the three story Victorian home that sits on the same 1 acre property. Sure wish you would take a pic of the house too. It's a fabulous 3 story with a full basement. Everything has been renovated - all new wiring, insulation, new plumbing, central air and heat. We are motivated sellers. The house and property appraised at $500,000 in 2006 and we have it listed for $390,000 due to the depressed housing market. This house has lots of documented history. The original owner only lived in it 2 years when his young wife died and he sold it to M.A. Joy who lived there for 50 years. There have only been 5 owners so all the original woodwork, hardware and glass are in tact. The 1876 reed organ brought up by a team of mules from Tyler Texas is still in the ballroom. The carriage house housed the first fire truck for Terrell - it was the only place big enough for it. The carriage house has a dirt floor and is two stories. It has stalls for horses and rooms upstairs that used to be for the servants. With all the work that we have had to do on the home, we just haven't had the time or the money to spend on the carriage house. It looks run down from the outside, but it is in pretty good shape. Not sure if you would want it for a house since it has a dirt floor but with many $$$$$, I'm sure that could be replaced.

I have been meaning to get over there and get a few good pictures of the house and grounds. I just havent been able to find time. Todays picture is the front of the house. There is so much more to see than just the front, you can find specifics here.
Posted by Jim Klenke at 6:05 AM