Cilla, owner of Saint Cox Dog Resort, and author of A Swede lost in Texas has started a new series called The Weekly Tree.  Shes documenting the changes to one tree weekly over the course of a year.  She has encouraged others to do the same.  I can't commit to taking a picture every week, but I will commit to taking a monthly picture.  I thought instead of doing one tree, I would do the trees that line my street.  I took this picture on 1/9 and will take a picture each month on the 9th. 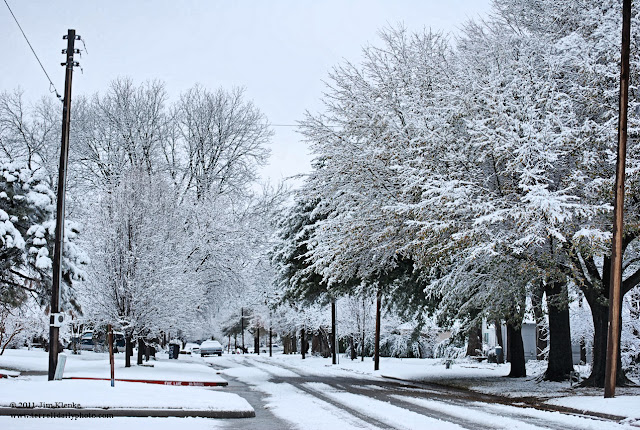 The Warrior Dash is returning to North Texas in 2011. It wont be in Forney though, they are going to set up in Roanoke, TX. There will be two days, April 16th & 17th. You can sign up now.

The date for the 2011 Caveman Crawl is rumored to be June 11th. I took photos at both events, and I would give the nod to the Crawl. The Crawl is a 5K off-road obstacle course held in Bridgeport, TX. As soon as they release more information I'll pass it along.

I stayed up late last night watching the exciting finish to the BCS National Championship game. I was hoping for the Ducks to pull it out, but I cant complain with the finish. TCU has finished second in the final AP poll. What happens if for some reason Auburn is declared to have used an ineligible player? Does Auburn forfeit the National Title? Is TCU awarded to title?
Posted by Jim Klenke at 6:30 AM