The big news yesterday reported by the Terrell Tribune, is that Terrell Athletic Director and head football coach Chris Gilbert is leaving to take the head coaching job at Lancaster.  But the games still go on.

The Lady Tigers hosted the Forney Jackrabbits at the TISD Complex Tuesday night in a District 15-4A contest.  For the Lady Tigers to keep their slim playoff hopes alive, they would have to complete the sweep of Forney.  They defeated them in December 54-42. 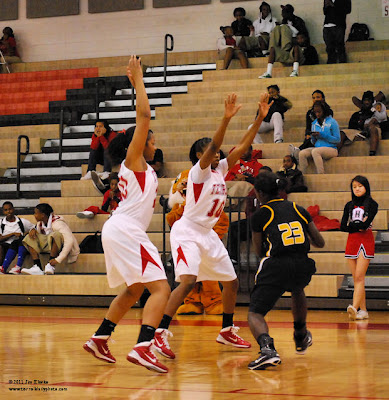 The Lady Tigers started slow, but once they got it going, there was no looking back.  Forney had a 9-2 lead with only 1:19 left in the first quarter.  A stiff Terrell defense held the Jackrabbits to only 1 more point the rest of the first half.  Terrell scored 6 points in the last 1:19 of the quarter and trailed only 9-8 after one.  In the second quarter Terrell's full court defense threw Forney off of its game and they never recovered.  Terrell led at half time 20-10.

Forney came out after the half and attempted to get back into the game, in the third quarter the best they could do was stay even, and after three Terrell still held a 10 point lead, 28-18. Forney cut the Tigers lead to 29-22 in the fourth quarter but the Tigers finished the game on a 13-2 run and won going away 42-24.

The boys basketball team went on the road and defeated Forney 57-45.
Posted by Jim Klenke at 6:30 AM