It's still cold but things are looking up

The white stuff is gone, but it's still cold. 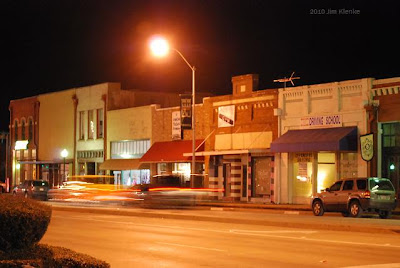 I went running down at the park after work, I can't match Brian running 20 minutes straight yet, but I was able to run 16 minutes, going 3-5-5-3 with 2 minutes of walking between each run.

I wasn't about to get out of the car to get a photo after dark though. This is Moore Ave from the car.

I am not much of a Texas A&M fan, but they gave #1 Kansas a run last night in men's basketball. I was pulling for the Aggies.

Pitchers and catchers report this week! I would love to be able to shoot a MLB game.

If the weather holds, we should be able to get some local sporting events in this week. The boys home soccer match against Kaufman has been moved to this Thursday night and the varsity baseball team is tentatively scheduled to scrimmage against Kaufman also on Thursday.

Facebook seemed to be having problems yesterday. If you didnt get a chance to see the pictures from the snow storm, click the Terrell Daily Photo Facebook Fan page.