Jamie Foxx to be honored in his hometown Terrell, Texas

The Terrell City Council meets twice a month, I go about once a quarter. There was a lot of information discussed at last nights meeting. You will have to pick up a copy of the Terrell Tribune for the details, I don't take notes. I was interested in seeing if anyone had any comments for the Council. Like I predicted yesterday, and as usual, nobody showed up to address the council on concerns, complaints or to just vent. 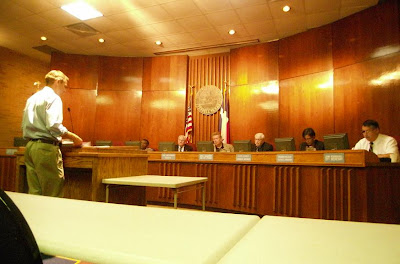 They did discuss the plans in place so far for the hometown celebration for Jamie Foxx on September 26th. Mr. Foxx will travel in a motorcade from Terrell City Hall, west on Moore Ave. to Memorial Stadium. Confirmed to be attending is Texas Governor Rick Perry, State Senator Bob Duell and State Representative Betty Brown. Terrell Mayor Hal Richards will present Mr. Foxx with a key to the city. This isn't a concert, this is the City's opportunity to thank Mr. Foxx for the years we have enjoyed watching him perform.

The event will be free but a ticket will be required. Ticket distribution will be announced soon. If you cant get a ticket, come down to Terrell anyway, line Moore Ave. for the motorcade, then enjoy lunch in one of Terrell's fine restaurants.

Besides being a super funny comedian, Mr. Foxx is an Academy Award winning actor for playing Ray Charles in "Ray", a multiple Grammy nominee and has sold millions of CD's.

Below is one of his latest music videos. Search You Tube for "Jamie Foxx Wanda" for some of his funniest work while on "In Living Color" and review his IMDB page for a full list of career credits and accomplishments.

One issue discussed at the meeting, that people seem to be having a problem with, is the cost of the event and how it's going to be paid for. The money spent will come entirely from the City's hotel/motel tax fund. The money in that fund can only be used for specific purposes, you can find the different ways the funds can be used here. Revenue raised from this tax can not be used for any other purpose.

That's not the only big news, but more about that later.

Paula Abdul is leaving American Idol. I think that's the final nail in the show for me. Nothing against the Kara who they brought in last year, but she is boring and takes herself to seriously. Some would say AI jumped the shark years ago. This may be the second trip over the shark.
Posted by Jim Klenke at 6:30 AM