Ham's Orchard will close for the season when they close next Sunday, August 16th. We had to take one more trip out there for some peach ice cream.

In addition to ice cream, Ham's also makes their own fudge. I would love to try the caramel pecan cheesecake fudge. The orange cream looks good also. Heck, they all look good. 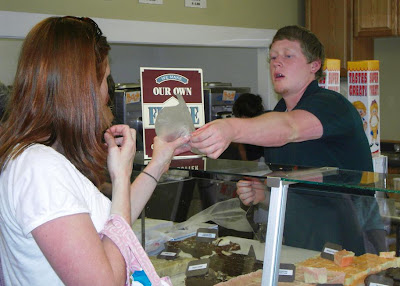 Click on the picture for a larger view.
You can even make out some of the fudge types on the table.

NFL football on TV last night, it may only be pre-season, but it's here, that's all that matters.

NASCAR postponed due to rain for the second week in a row. I am quickly losing interest.

From GeekSpeak I found a link to Americas Best Haunts. Thrillvania Thrill Park in Terrell has made the top 12 Haunts for 2009.

I think I am going to apply for this, Terrell Citizens University. It's not a reality show, just reality.

Ever want to be on The Price is Right? They are holding a contestant search on August 22nd in Hurst, TX. I would be there, but that's the same day of our fantasy football draft.
Posted by Jim Klenke at 6:30 AM