I played around with one of my pictures from the Photo Walk. This is the Griffith home on 1st street. Built mid 19th century. I normally go for the straight point, shoot, upload and post. I like the way this turned out, maybe with some practice I could get good at. 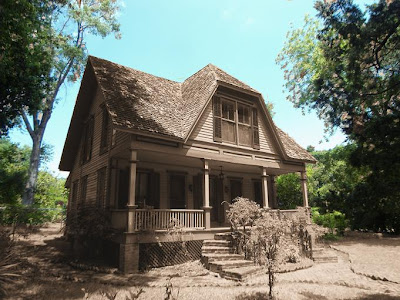 Scott Kelby has a contest that just started. Shoot on the sidelines with Scott and Mike. The winner gets to roam the sidelines of a Florida State football game. It's a chance of a lifetime for one amateur sports photographer, I am not even good enough to be called an amateur. I will settle for the chance to take pictures of a Terrell Tiger game from the sidelines.

By now everyone has seen Jill and Kevin's big day. It has over 15 million hits on you tube. Check out this spoof, it's Jill and Kevin's last day, their divorce dance. The creators said its all made in fun.

Terrell City Council meeting tonight at 7pm. Lets see how many people show up that are always complaining about something. Probably the same as usual-zero.
Posted by Jim Klenke at 6:30 AM