Skywatch Friday-Tigers back in action

The football Tigers are back in action tonight in Red Oak.  The Tigers will be looking to get their first district win of the year.  Kickoff is 7:30.  The Lady Tigers volleyball team will also be in Red Oak.  The varsity gets underway at 5:30. 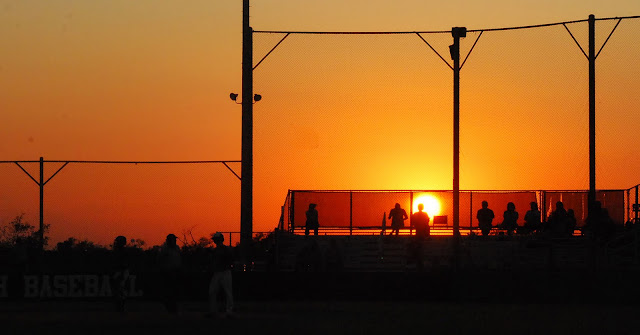 I caught the sun setting Wednesday night as I was leaving the ball field.  To view other skies around the world, visit Skywatch Friday.  I uploaded pictures from the game to Facebook.

The road to the World Series begins today for the Rangers.  They open their AL Division Series with Tampa Bay today at home. First pitch in the best of 5 series is at 4:07.  The Cardinals will play tomorrow in Philadelphia, first pitch is also at 4:07.

The State Fair of Texas begins today.  Its always fun to try all of the new fried foods.

Maines Paper & Food Service Inc. who announced earlier this month plans to build a distribution center in Terrell has said the center will employ 400 workers when built out.   The first phase is scheduled to be open in 2012.


TCU to the Big 12?  Works for me, and it seems a better fit than the Big East.  One of Big East power teams, South Florida, go whooped last night by Pittsburgh 44-17.  I don't look at the Big East as a football league. But they do have an automatic BSC slot.