Terrell's 7 on 7 football team won both games last night in the 7 on 7 passing league. The Tigers were able to run past Mabank in the early game. The Tigers started slow in the second game, but put it together on both sides of the ball to pull away from North Forney in the second half. The Tigers take a 4-1-1 record into the final week. Next Tuesday, Terrell will take on Rockwall Heath in the opening game and a bowl game in the nightcap. I will have a complete album posted on Facebook later tonight from both of last nights games. 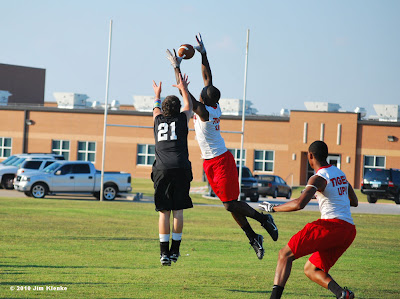 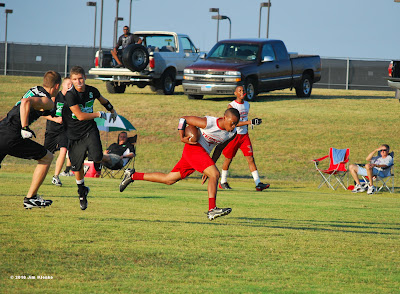 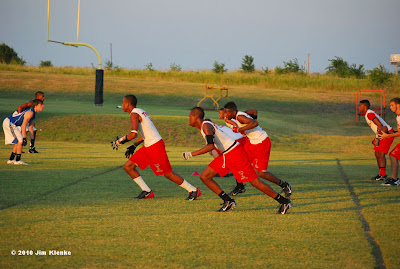 A note not related to sports. Do you ever notice the vehicles around you on your drive to or from work? Maybe you see the same license plate every day or a car that you want to buy is always next to you . You don't know the person driving it, but you recognize the car. That's the way it is for us on the drive to Plano every morning. We see the same cars every day. We have a neighbor who drives a work van into work. We see the van 2 or 3 times a week on the road. We don't know the driver, but we know the van. If we see it on the road, we know we are on time. Yesterday morning on the way to work on highway 205 we saw flashing lights. Not unusual because they always are running radar. As we got closer we noticed more flashing lights. The highway is a two lane country highway, but it has a lot of traffic going north in the morning. As we got to the lights we noticed the work van that we always see had wrecked. The ambulance was there and the van was in bad shape. It looked like it had crashed into a fence made of iron, the kind you see around pastures. As we drove past we felt like we knew the person in the van and could only pray he was alright. A few miles down the road the ambulance passed us going to the hospital. The work van was for a Dallas area electric company that I follow on Facebook. Shortly after getting to work, the company posted to Facebook about the accident and said the driver was in the hospital but would be OK. Lets hope he recovers fast.
Posted by Jim Klenke at 6:30 AM