7 on 7 ends early for Tigers and Jackrabbits

Tonight I went to Forney to watch the Tigers participate in the 7 on 7 passing league. This was the final week. In the first game of the night Terrell defeated Rockwall Heath. The nightcap was against Forney A team. The Tigers had a chance to finish the league with a 6-1-1 record and confidence going into the fall football season. Terrell jumped out to a 19-6 lead before halftime..........
Its no secret that Terrell and Forney do not like each other. Every time they play it is intense. As the game developed the play got more physical, with each team giving hard and harder "touches". The final play was a Tiger catching the ball and getting a forearm to the back and ending up on the ground. After that emotions got the best of both teams. Both benches cleared and a lot of pushing and shoving ensued before the game was called.
What could have been a positive experience ended abruptly and instead will leave a lot of question marks going into the fall season.
This was the final play of the night for both teams. 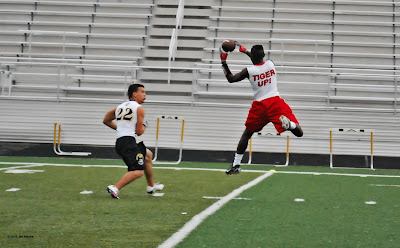