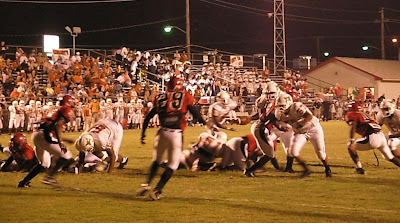 My view of the game, standing behind the end zone. I saw quite a few plays by West Mesquite lined up near the goal line. On this drive they settled for a field goal.
In the You Tube clip below, I was trying to get the band playing at the start of the game. Near the end, the Terrell player fumbles the ball. I was able to get the West Mesquite player picking the ball up and scoring. Only 2 minutes into the game the route was on.
Posted by Jim Klenke at 6:03 AM