Back to work today after taking yesterday off to recuperate from Sundays Lost Dog 20K race.  I finished faster than I even hoped for, 12.4 miles ran in 2:18:57.  My legs were a little sore, but I wasn't hurting as bad as I thought I would be.  We had rain Saturday night so the course was a little wet.  This photo is part of the spillway at White Rock Lake. 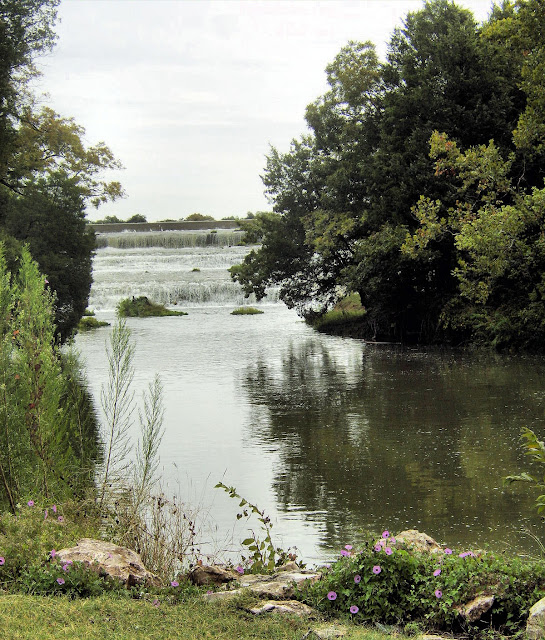 Hurting would be a good work to use when describing my fantasy football team.  I'm off to a 1-4 start and all but out of it already.

The Tigers football team takes on the powerful Corsicana Tigers this Friday in Corsicana.  If you are looking for Terrell Homecoming pictures, Don C Johnson has a slew of them uploaded and available for purchase.  He also has high resolution photos from all games this year available.  Look around his site, you may find a shot you cant live without.

The Rangers are up 2-0 on Detroit.  It was a great ending to their game last night.  The Cardinals evened their series with the Brewers 1-1.  Albert Pujols led the Redbirds to a 12-3 win.

The NBA has cancelled the first two weeks of the regular season because of labor issues.  I would like to watch NBA basketball, but there's college and high school ball I can watch.  The NBA players are trying to rally support by using twitter.  Sorry Carmelo, LeBron and company, you make MILLIONS of dollars in one year with guaranteed contracts.  Don't cry to me.

College bowl projections haven't changed much for local schools or bowls.  SMU is still projected to go to the TicketCity Bowl.  A&M has moved back up to the Cotton Bowl.  TCU is projected to go to the Maaco Bowl in Las Vegas.  Las Vegas is a great city, but I bet they can't wait to get into the Big 12.  There could be as many as 5 undefeated FBS schools on selection day.  It will be interesting to see the BCS standings when they start releasing them.

I have never been a fan of the Florida Gators or Tim Tebow.  I never even watch the Gators play.  I didn't know Tebow was a lefty.  I may have to reconsider, the great leftys like us have to stick together......that's left handed for those of you that think politics first.

For years the Detroit game on Thanksgiving has always been the dog game.  Nobody cared who was playing.  Imagine this year, Thanksgiving Day, November 24th the 10-0 Detroit Lions host the 10-0 Green Bay Packers.  The night game so looks to be a good match up also, San Francisco vs Baltimore.  The dog game?  How about Dallas against Miami.

I dont really like the Packers, but I would certainly buy one or two shares of the them.  My Facebook profile would say NFL owner.