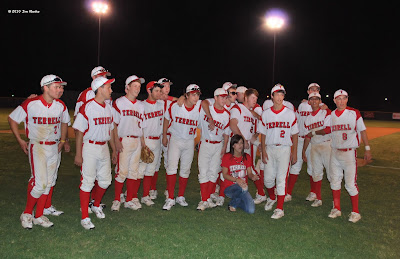 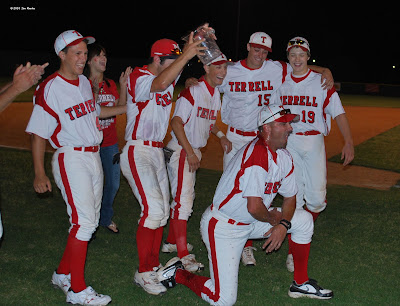 Terrell held off a 7th inning rally by Cleburne forcing a deciding game 3 Saturday at Navarro Junior College in Corsicana, TX.
The Yellow Jackets scored first in the top of the 2nd inning by taking advantage of two Tiger errors. The lead only lasted until the bottom of the 3rd when the Tigers struck for 4 runs off Cleburne ace Ty Taylor. Terrell loaded the bases for Barrett Calverley who hit the ball in the gap for a 3 run double. Barrett took third on a wild pitch, Brian Blades who then ran for Barrett scored on a ground out by Cody Weishaar. Terrell was up 4-1.
Cleburne put two runners on in the top of the 4th inning but a nice double play ended the inning. The Yellow Jacket batter hit a drive to right field. Jeremy Ringo made a nice catch, hit the cut off man Victor Andrade who threw to Nathan Adam who was able to get to second base before the base runner could get back. The Jackets were able to add a second run in the top of the 5th to make the score 4-2.
The Tigers scored two more in the bottom of the 6th. Cody Weishaar led off with a single. Alert base running by Cody allowed him to take third on a Chuck Daughterty sacrifice bunt. Heath Hottinger followed the sacrifice with a single to left field scoring Cody. One out later Victor Andrade singled to score Heath. Terrell led after six innings 6-2.
In the 7th inning, Cleburne put their first two runners on base, by error and a hit by pitch. The next batter sacrificed putting the runners on 2nd and 3rd. Ty Taylor then hit a left center field double to score both runs, closing the gap to 6-4. The next batter walked. A wild pitch moved the runners to 2nd and 3rd, with the runner on 2nd the tying run. Following a Yellow Jacket strike out, the next batter singled to left field. The runner on 3rd scored, but the coach held up the trailing runner who was the tying run. The next batter, who would be the go ahead run, hit a pop out to Jeremy Ringo to end the game. Final score 6-5.
Barrett pitched a complete game striking out 6 and keeping the Yellow Jackets confused all game.
Ty Taylor pitched a complete game for the Yellow Jackets striking out 10 Tigers.
Posted by Jim Klenke at 9:09 PM