This is a small outbuilding behind this house. During the summer its hidden by ivy. Here is the text of a small sign posted on the fence. 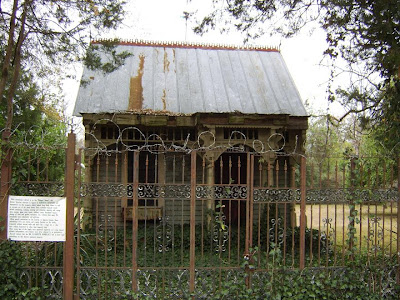 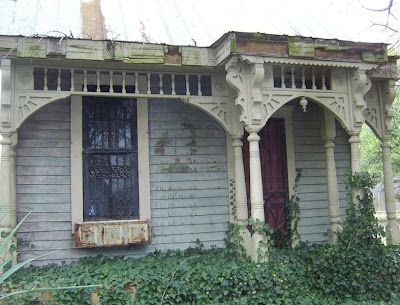 While mistakenly referred to as the "Midgets' House", this historic Victorian structure is typical of SERVANTS QUARTERS and dependencies on this property which helped keep daily chores as well as servants out of the main house. Here activities typically would include laundering, cooking, canning and pickeling, smoking and curing meat, sewing, home shoe repair, saddlery, minor household repairs, storage of seed and garden equipment, etc.: evidence that many 19c. households were remarkably self-sufficient.
Often overtly pretentious on the Exterior, to impress visitors, these outbuildings were raw, barren and crudely finished on the inside, frequently without interior walls and much like a stage set; and they were seldom frequented by other than domestic help.
When young men of the family were quartered separately as a step toward ultimate independence, such houses were often referred to as garconierres.
Records indicate that the DR. L.E.GRIFFITH HOMEPLACE, had at least eight outbuildings on this historic landmark property.