Tragic news brought the Dallas media to Terrell Wednesday night. It seems like the only time we see the Dallas media in Terrell is on the bad news day. Terrell is not a bad town, but I think we get a bad rap. It would be nice to see a story mention Terrell and it not be bad news. CBS TV 11 is my channel of choice, so you get their truck for today's photo. The Fox vehicle was an old, rundown unmarked van. This is in a bank parking lot across from the police station.

While I am complaining about the Dallas media, let me add the poor coverage they all provide during bad weather. Since we are to the east of Dallas we get hit after the Metroplex gets hit. The Dallas stations will track storms forming and coming into Ft. Worth and Dallas for hours, giving us updates of whats happening in all of the small towns to the west before it hits them, like this morning. Then, they act as if the world ends on the east edge of the Metroplex. No updates about storms hitting the areas to the east, when we will get hit, what we can expect. 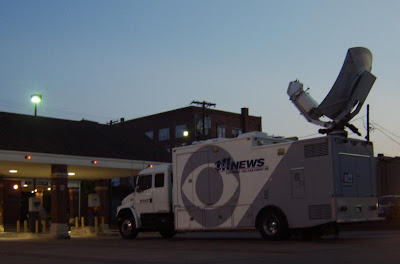 Our prayers go out to Ms. Bourns for a speedy recovery.

To the individual who broke in and beat her, I hope you are caught quickly. You must be some man to beat a 93 year old woman in the head and leave her laying on the floor barely conscious.

Update 6/20/08 An arrest was made in the beating of Ms. Bourns. They arrested a female suspect who lived near Ms. Bourns. If you follow the link they have her mug shot.
Posted by Jim Klenke at 5:50 AM