Todays picture is how I normally feel on Monday morning.  This guy is one of the Terrell coaches.  I added 77 photos to the Facebook page from Saturday mornings football game. 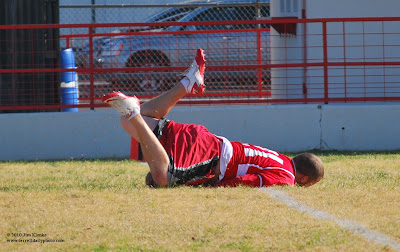 College football bowl games have been announced.  Did your team make it to a bowl?  Are you happy with the selections?  TCU gets Wisconsin in the Rose Bowl.  Not a bad consolation for missing out on the title game.   Oklahoma wins the Big 12 Championship game and will play in the Fiesta Bowl against a 4 loss Connecticut team.  I bet thats a good game.....

There are a few non BSC bowls that look like they could be good.  I like these games:
Cotton- Texas A&M vs. LSU
Capital One- Michigan State vs Alabama

The Terrell boys varsity basketball team made it to the championship game of the Royse City Tournament Saturday night.  In the final game, Terrell won the opening tip but had the ball stolen by Red Oak who scored an uncontested lay-up.  The Tigers played catch up the remainder of the night.  They ended up losing the game 53-47.  The guys had a great weekend and their overall record is 5-2.  Terrell hosts their own tournament beginning Thursday.  It would be nice to see support from the community for the tournament.

The Lady Tigers are at home Tuesday night against North Garland in a non district game.  The Lady Tigers have played hard for first year coach Mike Halac and will bring a 5-3 record into the game.

The Social Science Club Christmas tour of homes was held Saturday. I don't know how many tickets were sold, but I would guess it was a success. Each house was decorated for Christmas and each had something unique about it.
Posted by Jim Klenke at 6:30 AM