January 1st is theme day at CityDailyPhoto. The theme for January is Best Photo of the Year 2008. I am changing it slightly to my favorite photo of 2008. My best photo is just an average photo to someone else. As I narrowed my choices down to a small group, I noticed that my favorites are either military, sports or night time related. I guess that means I suck at taking daytime shots. It's hard to pick just one picture so I am going to post 5 photos starting today with #5.

This picture was first posted on July 26th.

Here is the text provided with the photo on that day.

A deployment ceremony was held this morning at Ben Gill Park for the departing soldiers of the Texas Army National Guard, 56th Infantry Brigade Combat Team, 949th Brigade Support Battalion, Company F Field Support Company. The men and women of Company F will be leaving Monday morning for a month of training before heading off to Iraq.

To show support for the soldiers before heading out, Terrell Chamber of Commerce treated the soldiers and family to a day of ceremony and fun. Below is the Company marching from the Guard Headquarters to the Pavilion. More pictures to come. 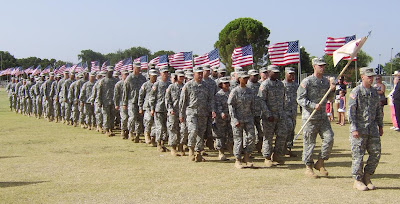 Today, Company F is in Iraq (pdf). We can't say thank you enough to the men and women who volunteer to serve their country. I served in the USAF from 82-88, during the quieter times.

The troops are suppose to come home sometime in 2009. City leaders promised another ceremony to welcome them home. I will be there with my camera.