That time of year 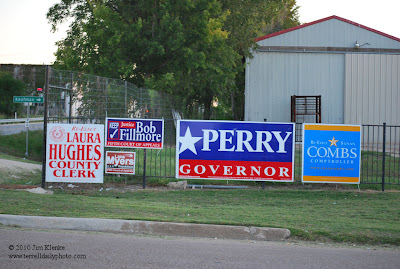 I wonder if anyone has ever done a study to see the economic impact of campaigning and elections.  Without getting into who should win or lose in another state, shouldn't putting $100 million of your own personal money help the economy?

Don't take my picture as an endorsement of any candidate.

The Texas Rangers took game 1 of their playoff series against the Tampa Bay Rays.  It's a shame they have to have playoff games during the week played during the day.   But, I would rather have day playoff games with the Rangers over nothing at all.
Posted by Jim Klenke at 6:30 AM