Phil Robertson from the Outdoor channels Duck Commander was the guest at this years Terrell Outdoor Expo held on Saturday. The Expo is like an arts and crafts fair but for outdoorsmen and hunters. Lots of big toys. 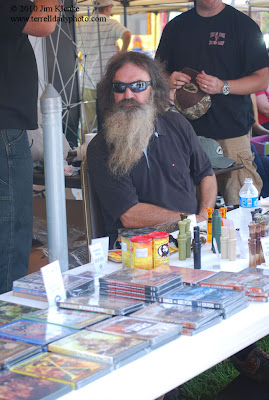 Despite the Tigers losing Friday night, they are still ranked in the Dallas Morning News 4A poll. They hold on to the #20 spot. Waxahachie, this weeks opponent is ranked #8. The District still has 7 ranked teams, with Terrell ranked the lowest of the 7. With only the top four in the district making the playoffs, they have some work to do.

Ranked teams in District 15-4A
#4 West Mesquite
#7 Lancaster
#8 Waxahachie
#9 Red Oak
#13 Poteet
#17 Corsicana
#20 Terrell
I put a few more pictures on the Facebook page from the EEast Texxas Jamm. I am not sure of the bands names.
Posted by Jim Klenke at 6:30 AM