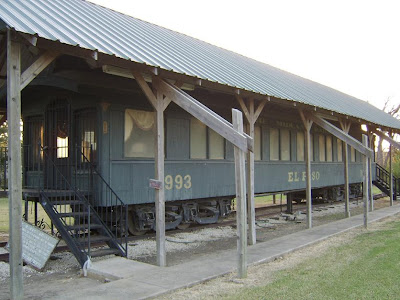 The following is taken directly from the Terrell Chamber of Commerce website.

The private car of E.H.R. “Ned” Green, President of the Midland Railroad, is on display in Ben Gill Park.

Green was the son of the notorious “Witch of Wall Street” Hetty Green, a gilded age multi-millionaire. He was a prominent citizen of Terrell and served as state Republican Party Chairman in 1896. Green took Texas’ first gasoline-powered motorcar trip in 1899.

The collection in the rail car commemorates the rail company, once headquartered in Terrell, and its colorful president.

The rail car is usually open during the Terrell Heritage Festival in April. The car is covered to protect it against the elements and extend its life.
Posted by Jim Klenke at 5:44 AM