Yesterday 25,000 runners braved rain, wind and cold 40 degree temperatures to run in the MetroPCS Dallas White Rock Marathon.  You didn't have to run 26.2 miles.  They also had a half marathon and a 5 person relay.  The company I work for sponsored a relay team that Brian and I were able to be a part of.  Brian started the race, leg 1 was 5 miles.  I ran leg 3, the longest leg.  Its listed on the course map as a 6.5 mile run, but its really just over 7 miles.  By the time each runner was finished they were soaked from head to toe.  As a team we completed the marathon in 4:39:29.   Maybe next year I will try to run the half.

Its 6AM and still raining.  Terrell has received just over 2 1/4" of rain since Saturday morning.  We need every bit of it. 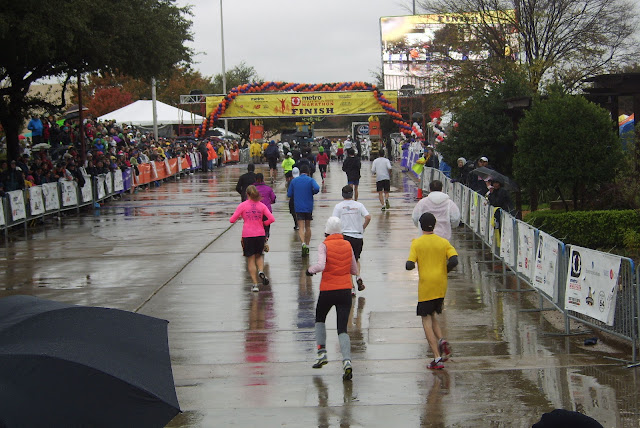 Once I got back to the finish line I went out and watched runners as they approached the finish line.  Just looking at this picture gives me chills again.

LSU vs Alabama in the BCS Championship game.  I would rather see OK State in the game, but it doesn't matter.  LSU would win against any team its put up against.

I like the Fiesta and Rose Bowl match-ups, but the Orange and Sugar do nothing for me.  I like all three area bowl game match-ups.

Cotton Bowl-Kansas State vs. Arkansas, these teams were a combined 20-4, losing to OK, OK State, LSU and Alabama.

TicketCity Bowl-Penn State vs. Houston.  Organizers of this 2nd year game must be thrilled to get these two teams.

The last area bowl game is the Bell Helicopter Armed Forces Bowl-BYU vs. Tulsa.  Both teams like to score.

Teams that finish with only 6 wins should not be eligible to go to a bowl game.  The organizers of the Kraft Fight Hunger bowl must be thrilled with their game. They will pit 6-6 Illinois, who lost their last 6 games against 6-7 UCLA.  The teams were so excited they both fired their coaches in the last few weeks.
Posted by Jim Klenke at 6:30 AM