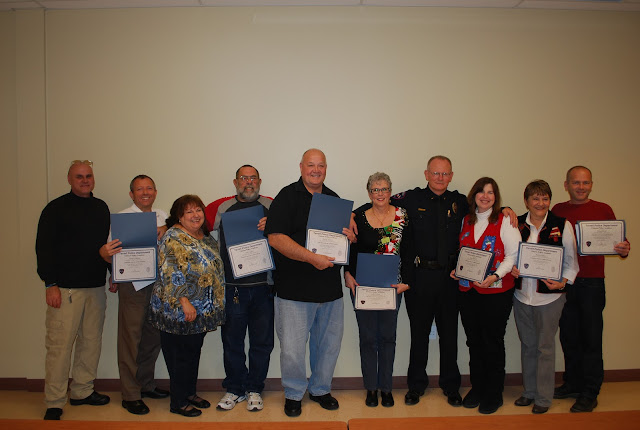 Prior to attending the Terrell Citizens Police Academy class, my impression and thoughts of the police department was probably the same as everyone else. Where are they when I need them? What are they looking for? I am not doing anything wrong, am I?

Last night, Academy Class Coordinator Corporal Rhitt Jackson and Terrell Police Chief Jody Lay presided over the graduation of the Terrell Citizens Police Academy. The course met once a week over a 10 week period, and I attended along with 7 other members of the community. The purpose of the Academy is to provide a general overview of police operations and try to dispell any myths surrounding police officers. The class instruction included basics of forensics, communications, records and intelligence. “Hands-On” instruction included police vehicle operation, building searches and firearms.

Officer Hamill gave us a tour of the patrol officer’s office; their squad car. We were allowed to get behind the wheel of a squad car and pull over fellow class members. The purpose was to understand that each traffic stop is different and they are never routine.

Officer Hauger, with the help of a few Terrell firefighters, showed us how to search a building and the difficulties they face when conducting a building search. We each were given the opportunity to search the Terrell Service Center building with the firefighters hiding in the building, playing the bad guys. When it came time for me to do my search, I knew there were people in the building and it was only an exercise, but I still had a feeling of anxiety.

Captain McKeown and Officer Hauger gave instruction on firearms and took us out to the gun range for a few hours of firearms training. It’s amazing to see the destructive force from the different types of handguns and the rifle.

My hat's off to all the men and women of the Terrell Police Department, uniformed and civilian. All of the officers and civilians gave up their free time to speak to us and give us an idea of what their daily work is like. Each individual was knowledgeable about their subject, professional and approachable. It's not a job I could do, but after taking the class, I feel I can help by being an advocate for the department and its officers.

Chief Lay said there are two major issues that the department faces; staffing and space. Terrell has received funding for two additional officers, but they are still understaffed. While it does affect the workload, it doesn't affect the readiness of the force. We were able to tour the jail and the station. The space they use is tiny. I'm not sure upgrading or remodeling the building would work. They need a new facility, and I would support any effort to get one built.

The Chief also said they would like to run at least one class a year, maybe two. If you live or work in Terrell, I would recommend attending one of the Academy classes. If you're not from our area, check your local police department to see if they have a Citizens Police Academy. It's time well spent. Oh, and it's free.
Posted by Jim Klenke at 6:30 AM