Patriot Half in the books

Yesterday was the 2nd running of The Patriot Half Marathon and 5K Race for Nate.  I ran the half, using the word 'ran' liberally.  I've been having some knee issues, so.......my time wasn't very good.  The course was a little different than last year.  It went though more of the residential areas of Rockwall that are hilly.  The run was fun from start to end, but did I mention the hills?  The weather was overcast and windy most of the run.  The wind felt good as long as you weren't trying to run into it.  I think by the time I hit the hills at mile 7, I did say there were hills right, I was pooped.  I wanted to walk the rest of the way, but the runners around me and the spectators wouldn't let me walk for long.  Around mile 10 I caught a second wind and starting running a little more.  I caught up to a group of runners who had constantly stayed ahead of me.  That made me fell a little better about my race, but I knew my time would suck.  My iPhone died right after I passed mile 11.  Going the last few miles without music helped, but I wouldn't want to run the entire way without anything. I'm not sure of my exact finish time, but it was around 2:56, not good at all, slower than my slowest time by over 10 minutes.  Even with the slow time, I still loved it.  The race it produced by the Rockwall Running Center, who did a fantastic job from start to finish. Registration for the 2014 run is supposed to open today.  If it does, I'll be signed up. 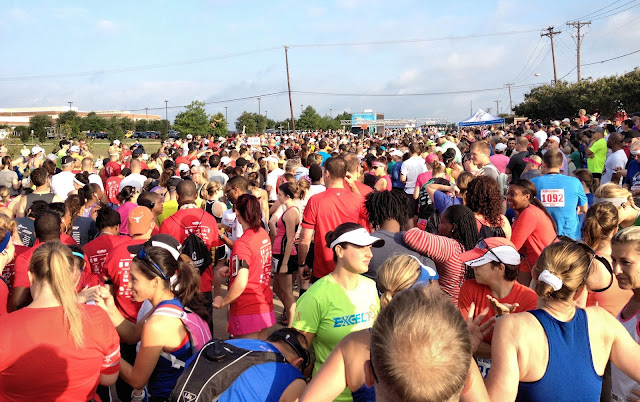